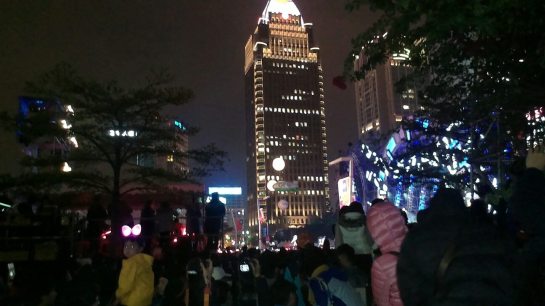 Looking back at the events below with four years of hindsight is interesting to say the least. It was great deal of fun, but I’m not necessarily proud of everything I did. However, honesty has its virtues, and this is my honest account of my first experience with culture shock.

Culture shock is hard to explain. It’s the culmination of frustrations suffered living in a place you don’t totally understand. It will happen to you, and it won’t be fun. Mine was quick as culture shocks go, but for a long month and a half, I was miserable.

Luazan and Ruan had quit, leaving three people to deal with the workload of five. I enjoyed Taiwan, but parts of it were wearing on me. It’s easy to point out the sexism and racism, but that wasn’t really the source of all of it. With the increased workload came increased pressure from bosses. It also came with their continued lack of support. The concept of a culture where it’s one for all sounds pretty good until reality has its way, and it did, especially in the company I worked for. Their interpretation of that concept was workers must do everything with nothing to make the corporation look good, and they should expect nothing back from the company.

Even Taiwanese have problems with this. They just won’t say anything, because who says anything? Hess International is the largest cram school in the country. Isn’t working for them good enough for you?

Supplies for kindergarten or science class were scarce if you were lucky. The support and instruction for new teachers was almost non-existent and the training offered by the main branch was usually a waste of time.

Now it’s not like these qualms disappeared. I just learned to deal with them, and to really enjoy Taiwan – to fall in love with parts of the culture and the beauty of the island. It also helped once Cat got there, and I was no longer spending 70 hours a week in the school. Cat was our new and fourth teacher who arrived in October.

Culture Shock sucks but it ends – hopefully quickly. I’m going to talk about a night that was the direct result of the stress Chris and I were under at the time.

Cut to being on the Capitol Star bus on the way to Taipei. The scarcely populated bus did their best to ignore us as we cracked open Taiwan beers and made more noise than was generally proper. Thankfully our minds were at the stress point of not giving a fuck.

Meshach met us at the bus station. We made our way to the bar district. All the time bitching about our school.

Taipei was happening this night. People were everywhere. We’d restocked at a 7-11 and were drinking while walking. Hell, we even ran into one of the head recruiters for the company we worked for. He seemed like he wasn’t in that different of a state than us.

“We have relief going to your branch soon!” he said. It was nice that someone was aware of the shit show Yilan branch was at that time. “Two more teachers I think!”

“Can’t wait!” I yelled back. It was only one teacher on their way, but hell, once Cat arrived it would return to a level of tolerability.

In the meantime, we had ample amounts of stress to translate into irresponsible behavior. We started at the bars. We went for some beer deal that set us up well. Even after an encounter with a confused bouncer, we were in good spirits.

“I could have choked him out with his gold chain,” Meshach commented.

Chris started doing accents trying to make fun of Meshach. I tried for a Boston accent and achieved Irish, according to Meshach, who immediately broke into very a British derogatory rant about the Irish.

We laughed our way into some line for a club. We tried speaking Spanish to some Spaniards for some reason. Commented on how so many girls were dressed like anime characters and even some of the guys too?

The fashion of Taiwan aside, we encountered yet another obstacle at the entrance. We needed ID’s and our school had our passports while they awaited our ARC’s (Taiwanese car ID’s). Chris and Meshach got through with state driver’s licenses. I’d lost mine and whipped out some travel ID thing I’d acquired before leaving. They didn’t seem eager to take it but persistence and English being spoken too quickly got my hand stamped and we were admitted to the club.

It was a hectic crowd. The center was mostly girls as guys hung on the periphery. Being two Americans and a Brit with a few drinks in us, we found ourselves in the center. I danced with one girl. We made out – she disappeared. A guy felt up my stomach and queried about my sexuality. After explaining that I liked girls, I somehow ended up dancing with his gorgeous lady friend. It was kind of like a metaphor for tolerance and fair treatment. I treated the gay Taiwanese guy well and was rewarded in a pleasurable heterosexual manner or something.

Later, I found Meshach and Chris by the stage dancing. We were a bit more enthusiastic than most and the club’s cameras were right on us. There were Taiwanese dancers on the stage, bouncers too, but I would end up ignoring them.

I’m not certain, but I think Meshach bet me that I wouldn’t jump on the stage. Somehow we worked it out that we would both go. I went first and drew most of the attention. Security was on me quick but for whatever reason I was able to jump back into the crowd, and in real world Assassin’s Creed style, disappear. Meshach actually got a solid minute on stage. Going far less noticed than I did. Then he followed my lead and jumped off stage once he drew attention.

The three of us met up at the psychedelic latrine of a bathroom in the club. We were blatant, and loudly speaking English. After that, it was a shit tax ride to Meshach’s and sleeping on a too small couch, I think.

That was probably at the extreme point of the adventure. Work, stress, and culture shock at least. The next day we were at least rewarded with filling out our pay sheets for the next pay period. Money doesn’t fix everything, but it can make the problem a little easier to solve.