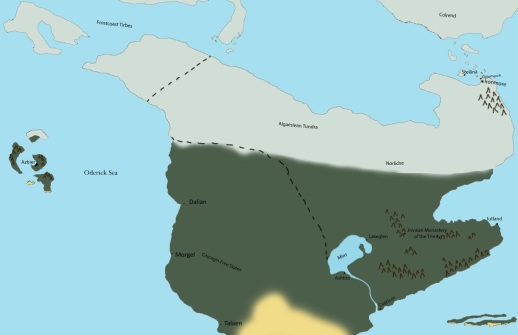 “To Azbier?” Malick asked. “That will take months. I wouldn’t return to the Monastery for close to a year. It would never be allowed.”

“I’ll create an illusion,” Rylah said. “They’ll think you died. Then you can return as the thought-dead hero. They’ll bake pies for you or something.”

“You still need to convince me,” Malick said. “Why don’t you make the trip to receive this weapon?”

“You’re the weapons side of this alliance.” Rylah smirked. “I like knives but weapons are definitely more your craft.”

“Do you trust this, Marceline?” Malick asked.

“I said some threatening garbage not knowing it was trash. Once I let her bring me into her illusion I was at her mercy,” Rylah said. “She treated me well, she seemed desperate – earnest.

“She also had me make this for you.” Rylah passed him a chain necklace with a silver eye medallion. “She showed me how to make this so that she could talk to you easier. Seems a Wicken skull is a little too dense to get through.”

Malick took the necklace cautiously. “So if I wear this she can talk to me?”

“Bless the Trinity, this world has gone insane,” Malick said. “I’m considering trusting a witch and a supposed voice that spoke in said witch’s head.”

“Consider me a friend,” Rylah said. “We’ve taken on the role as the silent guardian pair, so we might as well keep up with it. It’s not easy for me to send one the more useful people I know to the other side of the Continent.”

“Is that a compliment?” Malick asked.

“Or an insult to the rest of this world,” Rylah countered. “Put on the necklace tonight. Marceline will look for you then.”

“What will occupy you?” Malick asked. “You going to take on Belragh herself with all this power you found?”

“What do you mean?” Rylah asked.

“Early when we’d first met and you tried to kill me in the Fae,” Malick said. “You would go about that differently now wouldn’t you? You could also now locate that pool of corruption a lot easier, correct?”

“What gives it away?” Rylah asked.

“Well, you are lounging in a tree throne now in this place. It has to be entirely Fae touched, but my senses are telling me I’m still in the mortal. You can also just bring me here from anywhere. This is the same place you would take me to near the Monastery. You went from a village charmer with powder filled eggs to the doubtfully contested Witch Queen of the East.”

“Corteal taught me a few things,” Rylah answered. “Witch Queen of the East, it has tone to it. I may need a forest castle.” She had a big smile. “I guess I should be the Monasteries top target.”

“Once Hell stops crossing and witches become our primary interest again, then yes,” Malick said. “You probably will be.”

“Till that day then,” Rylah said with a smile. “While we’re still allies of necessity, let me show you a little of what I can do.”

“What can you do?” Malick asked, following her lead.

“I’ll send you and your horse as far west as I can manage,” Rylah said. “Also I’ll take care of your death illusion. I have several ideas for it.” She slouched in her tree throne. Her garments had even improved. It was killing him that he couldn’t understand her new strength.

“Don’t make me look to dramatic,” Malick said. “Anyways, you never answered my question. What will you be doing while I go west?”

“We will need someone or something to resist Belragh until help can arrive,” Rylah answered.

“The Faery are far from weak, they will resist her.”

“That is what I’m counting on,” Ryah said. She then pointed. “Walk this way, in a couple of hours you will come out by a city.”

“Ask when you get there,” Rylah said. “It’ll be a surprise. Be careful, Malick.”

“I was thinking your eyes,” She said with a sly look. “Take care of those at least. Please avoid geese, swans, and other large protective birds.”

Malick sighed. “You’re pretty, but a whole lot of other things too. It would never work, Rylah Manuel.” Malick put on his hat and stood up. Tipping it with a smile he walked by her towards his horse.

“Ride easy my Malice Love,” She said as he got onto his horse. “You could be mine whenever I wanted you. Remember that. I’m the Witch Queen of the East.”

“Easy hunting your grace.” Malick gave her a bow as he rode off.

“So long,” Rylah called after him, “My useful little Wicken Man!”

Rylah hadn’t lied that she wasn’t exactly comfortable sending Malick west. He was the only one she trusted to reach Azbier. Marceline would help him. She had her own concerns at the moment.

She was a powerful witch with resources. She was a Fae Witch. Something in her was Faery even if her body was human. Her powers had come quick when she’d opened herself to the Fae. The magic of the Fae was intense – infinite. She couldn’t do as much as she wished, but what she could do, she did well.

Cyrah and Hospin were both in the Fae now. They were following different paths. Belragh and her friends had separated from each other, yet they hadn’t left the Fae. She would track them – watch them – learn all she could. She felt relatively exposed now though without her more durable tool. She would reach out to Mr. Atwood she decided. She needed someone trust worthy in the Mortal. Especially if she was to fully reenter the Fae to contact the Faeries. For some reason she had little doubt that Mr. Atwood could handle her observation role from the half Fae and Mortal zone she’d claimed.

Malick was found by Marceline as Rylah said he would be. She swept him into her illusion the moment his eyelids sunk in meditation. She was beautiful. At least the image she wore was. Malick knew to take what he saw here with healthy skepticism. The way she wore her hair though…

Rylah had sent him all the way to Mavrin Col, the furthest east of the Free Cities. Malick new of the City because his father would order books from the merchants of Mavrin Col. It governed itself, and preserved more history than any other place in the east had.

Malick hadn’t wanted to linger so he bought what he’d needed and continued west. He was under the cover of the camp he’d made. It was a warm night, but right now his mind was in an entirely different place.

“You didn’t rest in Mavrin Col? I hear their Inns are top class,” Marceline said.

“I got what I needed, but I don’t have much,” Malick explained. “Easier to travel like this. I’m a foreigner. I’ll attract attention.”

“You would,” she said. The illusion shifted. They were in a domed room where light poured in from a circular window at the the ceiling. Her eyes where a sharp green – something like spring. Her lashes were long and thick. He wasn’t trying to notice all this. “Rylah said you’re a Wicken Man. She said that you were useful and good with weapons. I can see that you carry an abundance. A silver slinger for sure.”

“A fairly common human fighter of the Fae. A silver slinger uses silver to make themselves dangerous.”

“I can use a little magic too,” Malick defended himself. “We’re attuned to the Fae. It’s what our recruiters look for.”

“Interesting,” Marceline said. “So you’re half silver slinger, half warlock?”

“Highly limited warlock, location spells mostly.” Malick didn’t want to continue his self-explanation. “I want you to show me why I’m making this trip. Tell me more about Azbier, I thought your Empire had crumbled.”

“The weapon I’ll give you will drive back hellish forces and close rifts. It’s a purer version of the amulet of the Trinity that you carry now,” She explained. “We have more than a few to share with you.”

Malick could imagine a stronger version of his amulet. He could use that. “What about Azbier, and what are you?”

“You want to know about me?” Her eyes widened slightly. Malick liked that. He liked just about every way she moved. “Well I’m the daughter off…”

Tarabel struggled to his feet. He felt weak – heavy – empty. His brother no longer held him but it left a foreign emptiness inside him. Stumbling he sought the most familiar thing he could. He opened the doors to the Church of the Trinity in Steillina. Even before the Alter his emptiness persisted. He collapsed. In his dreams the observers found him.

The vision was well crafted. It showed Tarabel what remained of Azbier and that observers still watched over this world. They had worked to defeat him. He had felt them hinder him during his fight with the Faery swarm. It seemed now that they needed his help. They showed him the gates on Mount Dansu had opened again. That the Mortal and the Faery where under greater threat than they’d ever been by just him. He’d known Disinner was capable of sending more; as long as Tharah gave him the strength. He knew a great deal about Disinner now.

Tarabel awoke surrounded by his disciples and by his profit. “Your light has faded,” his prophet said. “I could heal your wounds but your strength has not returned.”

Tarabel stood. He looked upon his disciples with knew awareness. The strength he’d given them was still held inside them. It had not been taken back by the Observers or by Disinner. The taint of the Felnether was gone from these people though. The power they held was as pure as they were. Not that humans are ever pure but they carry a certain earnestness. It gives them a unique strength. Tarabel felt strengthened, connected. He could draw from them.

“We travel west,” Tarabel said. “I was just shown a terrible dream. This world will test us but our salvation resides in the west, in Azbier!”