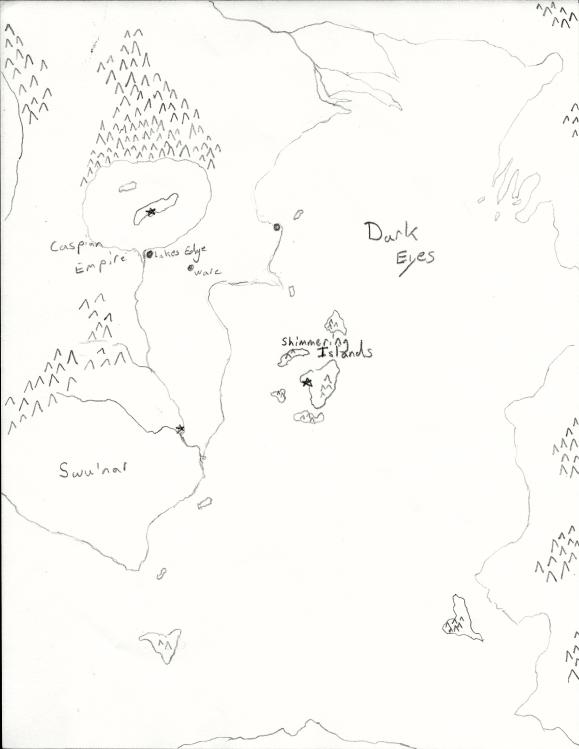 The Prince adjusted the fabric draped over his shoulder in the Swu’nar style. His attention was drawn more to his own physic than the pretty dark haired face over his left shoulder.

“My prince, let my help you with that.” Silisa’s naked breasts brushed against the thin cloth over his back while she adjusted his garment. Her hand slid into areas arousing him.

Turning to face her he ran his hands across her stomach then as far down her thighs as he could reach.  She was not yet pregnant enough were he couldn’t still pleasure himself with her, though her stomach was starting to show.  He laid her across the bed and undid the clothes she’d just carefully arranged. She wrapped her legs around him, pulling him closer.  She clung to him as he thrust in an out of her satisfying his lust.

The religion of Swu’nar did not believe in polygamy, but said little about highborns having various lovers.  Silisa was the second. He had found her on the slums starving in a corner, it had been her eyes. That was half a year ago.  His first was a small red headed servant girl. Red hair was rare in the south. She must share some blood with the pale featured invaders from the north. The Caspians who had taken his great great grandfathers land with their white and black steel. The red head’s name was Diana. She was now sickly and very pregnant. He concerned himself with her health frequently when he should be focused on his war.

He wanted his next girl to have wider hips, Neither Silisa nor Diana had good hips. He was mostly dressed again thanks to Silisa. Without much of a word he left the room.

His father had died seven years ago when Saazar was twenty. In the last ten years of his father’s reign he had been crippled and disease ridden. He’d let the tribes slip from his control. In seven years Saazar had united the tribes under him and had started his invasion north. He wanted more than lust to rebuild the old kingdom.

The Star room was occupied by his war console and personal advisors. His entrance was noticed and he had to raise his hand, so that sixteen of his top men would stop kissing his floor.

“Prince Saazar,” The Lord Advisor Tal, Saazar’s second, addressed him. “May we begin this dinner?” Lord Advisor Tal was a carryover from his regime. The old man was talented, but bored under Saazar’s father. Now life had clearly returned to him, as he looked ten years younger.

“We have heard from the Shimmering Islands. They have accepted,” Tal said to Saazar as he took his seat.

“Not surprising,” Saazar said. “They lost coastal land and Islands to the Caspians, They’ll never have a better chance to reclaim them.”

“Yes, for now we need to focus on the plains. The bulk of Caspia’s army waits for us there.”

“Our forces are seasoned and numerous. We will take them in two weeks. I will command myself,” Saazar answered.

“The Caspians are well fortified,” War Consoler Ardic said. “It will not be clean.”

“I would not expect it to be,” Saazar responded. “We are well equipped and will take the time to soften their fortifications.”

The conversation drifted away from politics as food was served. Saazar’s attention turned towards the female servants that served their food.  Two stood out to him above the rest, there was a lighter hair girl from a desert tribe. She was a little young but she was quite the ketch and her hips were wide, which was what he was looking for.  The other had dark hair and was from the local population. She was older than the other, closer to his age. She also had full heavy breasts though her hips weren’t wide enough.

A few words into his retainer’s ear and the first girl was in his personal chambers when he returned to them. She watched him nervously as he entered. She was nearly crushing her own hand inside her tense grip.

“What is your name?” He asked as he began to remove his clothing.

“Caarsi, my prince,” She said.

“Caarsi,” he said to himself. “Caarsi, where are you from? No what do I care. I shouldn’t plague you with boring questions.”

“My prince is not boring. I’m from Arsi, from the east,” She said.

“I like your hair,” he said. “It reminds me of something.”

“It does,” He said. “You do. Sand is very important to Swu’nar. We used it to evade our invaders, it made us strong. It made us so now we can retake our old home.”

“I always thought so,” She said.