“Good morning Mr. Amora,” Rylah greeted Malick as he entered. He was dressed as he’d been the night before. He had acquired a crossbow at some point.

A second Wicken man came in behind Malick. “Is this the Witch?” He was old and didn’t look overly healthy. He was dressed as Malick was, the long well fitted coat added form to a body that probably had very little. “And who’s he?” Jarl gestured at Atwood who was carving a walking stick.

“He’s Mr. Atwood, our guide,” She answered. “And Rylah works fine, thank you.”

“Alright, well this is Jarl.” Malick pointed at the older Wicken Man.

“Are we ready?” Atwood asked.

“Alright!” Atwood stood up and passed the walking stick he’d been working on to Rylah then grabbed his own. “Shall we head to the Fae?”

“We have horses you won’t need those sticks,” Jarl said.

“Can’t bring horses. We’re going to the peninsula.” Atwood smiled as he made his way out the door.

“He’s Fae touched, too, if I’m not mad,” Rylah heard Jarl whisper to Malick. She laughed and turned to follow Atwood.

People were awake in Lakeglen despite the previous evening’s festival.

“You’re a local celebrity aren’t you?” Malick walked up beside Rylah and kept pace. “So it was your father and step-brother that were killed by the Wicken men.”

“We don’t really know what happened.”

“Honestly besides the beginning of the ritual I don’t remember anything.” Rylah hadn’t talked much with anyone other than Atwood, who was currently busy.

Rylah kept talking. “I slit my hand and the dove’s neck; the moment the blood hit the skulls my memory stops.”

“It’s weird talking to a witch,” Malick said off topic. “I would usually just shoot them,” He said this absolutely non-threatening.

“Let’s not talk about you shooting Witches.”

He smiled. “When did you start remembering again?”

“When I woke up, naked and shivering in the snow my father’s and brother’s familiars keeping me warm – corpses scattered about. I saw my father’s dead body. I’d later realize that the pile of Ashes was Brandon.” Rylah felt herself shiver.

“No you’re not. Remember? You kill witches.”

Their conversation ended with the presence of people. Atwood had a small rowboat that would be just large enough to carry them across the channel to the tip of the peninsula. As they drifted across the still water Rylah saw Hospin’s reflection. She looked up to see the great owl soar over them.

“Mr. Amora,” Atwood addressed Malick out of the blue. “How is the Monastery these days?”

“I’d assume it’s the same as it’s been for years,” Malick answered Atwood’s question. “The forges were expanded five years ago but that’s it. Why? Have you been there?”

“I have once. Not many places I haven’t been too.” Atwood laughed. “I am quite old.”

Hospin sent images into Rylah’s mind. They were memories. She saw effigies burning in the night surrounding a green fire. She even heard the voices of men chanting. Yes, she expressed back towards the owl.

“Not all of us are world travelers, warlock,” Jarl said. Rylah turned her attention to the conversation on the boat.

“Warlock?” Atwood asked. “Me? No, just familiar with the Fae.”

“Tell that to the stake I’ll tie you up too.”

“You couldn’t.” Atwood answered without missing a breath.

“You know where our orders came from.”

“The Monks can choke on my swollen right nut.”  They reached the opposite shore after a morning of rowing that went as smoothly as Rylah could have hoped.

“We’re not far. It’s a short walk from here.” Atwood said as they secured the boat to the shore. 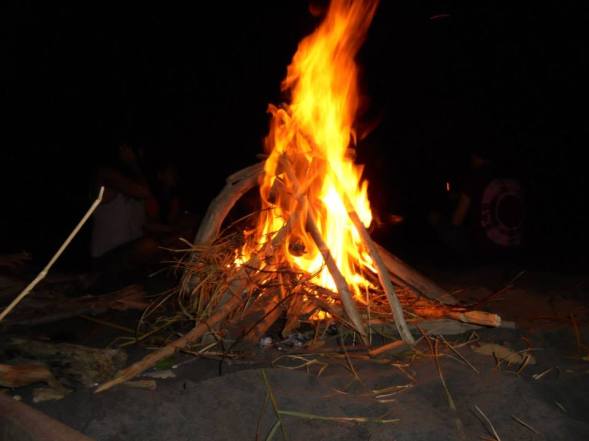 Stakes still remained where the effigies had been burned sixteen years ago. They formed a ring around the small crater. Malick led the way stepping between the stakes. Rylah watched him draw one of his pistols.

“Well here we are Wicken,” Rylah said. She was a couple strides behind Malick.

“Anyone could, they just wouldn’t understand it,” Atwood said coming up to stand next to Malick. “The Fae is more here than the Mortal world is.”

“You said you tried to seal it?” Malick asked Rylah, “What did you try and do exactly.”

“The same thing you two are about to try I’m guessing.”

Malick nodded and walked to the edge of the crater and looked in. “A blood sealing ritual… maybe. Just not here, not really.”

Rylah walked up next to him and looked into the pit. The bottom was lined in what looked like green emerald. It pulsated and hummed to the rhythm of the faint glow that intensified then faded.

Rylah looked up at Malick. They made eye contact. “What are you thinking?” Rylah asked.

“I’m thinking we’re going to have to visit the Fae.”

“Good luck with that.”

He smiled then rather firmly shoved her into the crater.  Rylah never felt the bottom. Nausea filled her as she tumbled into the Fae. She felt her body hit the ground before her vision returned. By the time she got to her knees Malick had hit the ground next to her.

Rylah looked around at the bizarre land scape. Trees with purple bark and rotting red leaves, and thick gnarled trunks with roots that spread out like webs across the forest floor.  The terrain was rocky. A thick, sunset-yellow moss grew on everything. The moss glowed giving illumination to the otherwise dark place.

“You monk loving swine!” she drew the knife she concealed in her boot and pounced on Malick who was still coming to his feet.

He caught her wrist stopping the knife inches from entering his liver. But then the rest of her hit him. They rolled to the ground and Rylah tried to free her wrist. No matter how hard she flailed the blade around, she was only able scrape it harmlessly against his heavy garments.

He didn’t bother to stand, he rolled and pinned Rylah with her face in a nice clump of moss, contorting her wrist till she released the knife.

She felt Malick release his hold on her and she was quickly on her feet a distance away from him. He unfortunately had a pistol drawn and aimed at her. He had his other pistol drawn as well.

Malick ignored her. “There’s a lot of corruption here.”

“Is it any different than the rest of the Fae?

“How often have you?”

She paused. “It is rather gloomy. There aren’t even stars.”

“I think something from Hell is stuck here. I think that’s why this rift is so strong.”

“You knew about this before we brought you here didn’t you?” Rylah asked.

“Probably not on his way,” Rylah answered.

“I should have had him push you.”

“Are you in charge, I thought he was?”

“He’s mentoring me, I think. That’s not important. You’re a Witch.”

“Can you do anything to point us in the right direction?”

“You’re a Wicken can’t you do the same?”

“Yes, but I’d have to put one of these guns away, and put my focus on something other than what might be coming for us.”

“I can sense creatures of the Fae as well as you can.”

“You have pistols loaded with silver bullets hopefully.” Rylah and Malick both turned to see Atwood standing up. “Keep those ready, Rylah and I will do what we can.”

“I think there is some remnant of Hell still here,” Malick explained.

“You’re probably right,” Atwood said. “Hell’s residue is to blame for the entirety of the Fae’s corruption.”

“I know,” Malick said. “I was thinking more like a physical object, like a ring, a weapon, or maybe even the Remains of a Draegon.”

Atwood laughed. “Remains of a Draegon, child, the Faeries ate there bones.”

“Come on let’s just start looking so we can get out of here,” Rylah interrupted. She reached into her pack and pulled out a thin copper bracelet. She chanted something and it hummed till it found what she wanted.

The device was called a diviner. Rylah had created it to pull towards areas of Fae corruption. Now she asked it find the strongest source.  It had been a chore to create, but not too difficult to learn to use. She quickly was leading them beneath the putrid foliage.

A sound like a falcon’s screech, but carrying far more bass, rippled through the forest.

“I don’t feel anything.” Malick whispered while looking everywhere.

“Nor would you, the Fae was just remembering something that happened once,” Atwood said.