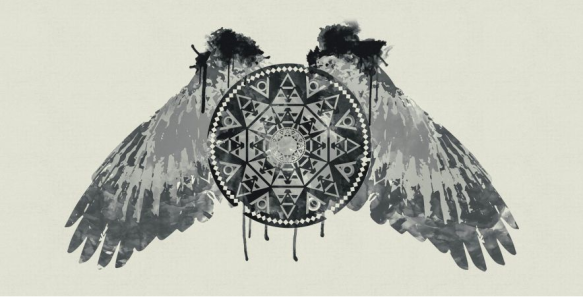 “I have led so many souls, whose only crime was lack of belief in you, through the gates of Hell!” Disinner spoke to the court of Heaven – assembled in a marble amphitheater that faced a raised tier where the Father the Mother and the Spirit sat. “I beg the Trinity to not damn innocents to the Felnether.”

“They are not innocent if they refuse to see the light,” The Mother spoke.

“All we send to Hell deserve their suffering,” The Father said.

“I cannot agree with that!” Disinner had not meant to raise his voice.

The Spirit spoke the Spirit never spoke. “Disinner.” The Spirit was pure white light wrought into a humanoid shape, adorned in intricate golden armor inlaid with a variety of ancient gems. “It’s heresy to question.”

Disinner held his tongue and left the Court of Heaven. He saw Tarabel leave behind him and follow him as he descended to the Mor towards his post. Tarabel landed only several seconds after Disinner. Though a powerful Arae in his own right, Disinner felt small next to Tarabel.

“It is on the Mother’s behalf that I come to speak to you. The Trinity have been watching the doubts crawl slowly into your mind as generation after generation you stand your post. Dissiner, how long have you guarded the gate to Hell?”

“For seventeen thousand years I’ve stood vigil over the Damned. I was of the first brood like you, Tarabel. I too am one of the Father and Mothers first borne, you know all this,” he hissed.

“Of course,” Tarabel answered. “I have not forgotten about your great power, your sway over souls. I am here simply as a messenger my brother.”

“Deliver your message then,” Disinner said turning away from Tarabel. Who looked over the intricately engraved cold iron gates set in the cliff face of Mount Dansu.

“You know the punishment for heresies committed in Heaven.”

“I questioned the Spirit’s judgment.”

“You questioned the Spirit’s judgment, you showed lack of faith. That is a mortal’s sin.”

“Then return my Soul to the Nether.”

“The Mother is claiming your life but the Father want’s your wings.”

“And the Spirit?” All their arrangements came in three parts.

“He has decided you can fulfill your duties from a new post.”

“From in there?” Disinner said still looking at the gate. He felt the feathers of his raven like wings quivering. He wondered if Tarabel would just take his wings now while his back was turned.

Disinner turned to face him. Tarabel’s long dark hair contrasted his brilliant gold armor and blindingly white eagle’s wings. Tarabel was so radiant with Spirit’s light that the black and white speckle pattern of Tarabel’s wings was no longer visible. It hadn’t been for ten thousand years.

“Disinner, brother, do you accept this punishment?”

“The Spirit blinds you!” Disinner cursed. The twin blades, Guardian and Guidance, flashed into his hands. The broad and curved blades were two of the deadliest in creation. Tarabel’s Shield and sword appeared in his hands.

Tarabel absorbed Disinner’s initial onslaught hiding mostly behind his shield, Zeal. Tarabel bashed Disinner away with Zeal. Then, with a couple lightning fast motions of his wings, Tarabel was behind Disinner.

Tarabel swung his sword, Retribution, twice, hacking off Disinner’s wings. Disinner’s swords dissipated and he fell to his knees.

“Open the gate,” Tarabel commanded. Disinner struggled to his feet, his knees and legs were sticky. He was kneeling in his own blood.

Disinner spoke and the gates opened. Slowly, the odor of the place filled the air while they waited. Hell was in a cold mood, Disinner couldn’t feel the heat from its fires. Tarabel grabbed him and carried him through the gate. Down into the Mountain, Tarabel carried Disinner. Once over the great ringed pit itself, Tarabel let Disinner fall.

He could feel the eyes of the souls he’d led to this place watch him fall past them as they struggled through the torments of the rings. Then he felt the presences of the great creatures that lived at the depths of this place. He watched them detach from the walls and descend after him. Their molten bodies brought light and heat to this presently cold and dark Hell.

Eventually Disinner struck the core. It was frozen over – solid ice. Tarabel struggled to his feet and climbed off the ice onto one of the paths of earth that crossed the frozen over Hell. The ice had felt as though it had been sucking at his soul. Disinner looked around. Somewhere in the distance Disinner could make out what looked like a city. But his view was quickly obstructed as Draegon began to land around him. Their furnace-like bodies were somewhat more subdued when hell was in a cold state, but Disinner didn’t figure that it would last much longer. The ice was sweating.

Guardian and Guidance appeared in Disinner’s hands and he charged the closest Draegon. The creature didn’t seem to know what to think of the much smaller wingless Arae. That was until Disinner tore out its throat in a swift burst of speed. At this point Hell raged into a furnace, and the Draegon flew everywhere.

Disinner fought as he ran toward the city. He made it to the gates but as he pounded on them they would not open, and he could not force them. So he turned to fight the Draegon. It would be a Draegon’s fire that claimed him. But not till after he returned eleven Draegon souls to the Felnether.